I stopped at a gas station and was approached by a blue uniformed man who say he would wash my windshield for free. being a dumb teenager I said sure, what's the worst that could happen.When I came out the gas station

by Steven (San Diego)I was fed the same scam story by a gentlemen at a gas station, only I really didn't want a repair. The only few cracks on my windshield had been there for years and were not going to get worse.

Comments Off on Refuse Scam, Get Scammed Anyways!

A chipped windshield is more than an aggravation, it can be costly. So is there a way to avoid getting rock chips?Well, you can't prevent all rock chips, but good driving habits can help protect your windshield.You have probably seen construction trucks with 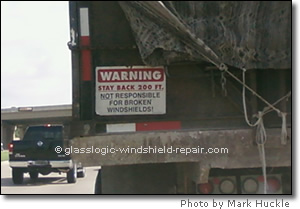 Cracked windshields are a summer tradition here in Dallas. The sweltering Texas sun takes a toll on your windshield, especially if it is already damaged.I get a lot of phone calls from people who wait too long to request an appointment. By the time they call me

I recently read a blog post about someone who got a bullseye from a rock flying up off the road. The person decided to try a Do-It-Yourself kit, but then chickened out.Instead, he called a nationally known auto glass company to come and fix his windshield. I guess he was nervous about them, which is why he posted to this forum looking for feedback.I hear that a lot, but that is not what prompted me to write this article. What struck me was one of the other comments 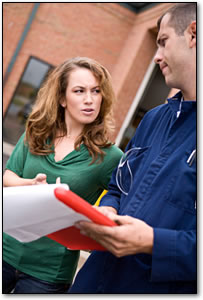